(Taken from "Alderton" The Book)

After WWI there was a deeply held wish in the village to have a proper memorial to those Alderton men and women who had served their country.
The question of what to build was long debated - the Rector and Churchwardens felt that a Cenotaph type of memorial would be the most appropriate use of the money collected.
However a group of villagers thought that the greater need was for a village hall. At this time any meetings were held in the larger schoolroom. There was a time of discussion (contention!) , and it was agreed that the money be divided between the two suggested projects.
Below is a picture of the dedication of the memorial. In the foreground are the Alderton service men who came back from the war - faultlessly lined up in the way familiar to them from their military training. In front of them are the widows and mothers of those who did not come back. It would have been a sad and sombre occasion for all, and one repeated in many villages.
Some time after this picture was taken an iron railing was built around the memorial. 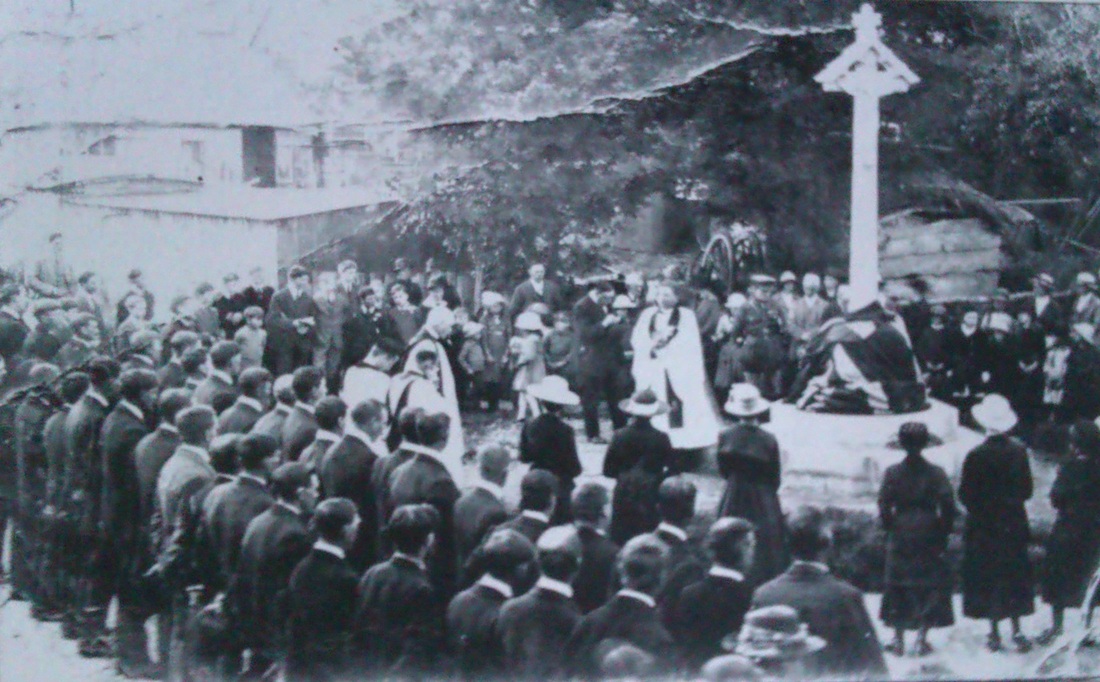 The main settlement in the parish is Alderton village, which is on the patch of sand mentioned above, north of the centre of the parish. The village is compact, but it appears to have evolved from two separate groups of houses, which may correspond with the 'Bretenyend' and 'Polysend' mentioned c. 1500. One group forms a square, with the road running through the village on the north side, lanes on the east and west, and the church and churchyard closing the south. This group of houses included the rectory and many of the older cottages. The other group lay further west along the road and included the manor-house of Alderton manor and the inn; from it a road ran south, and from the road a lane ran eastward to the church, so that there was an approximate rectangle made by the roads and lanes west of the church. The southern and western sides of this rectangle remained free of houses until the late 19th century; on the western side stood the village pound near the site of the later war memorial, and on the northern side was a field known as the Green, where in 1962 games continued to be played and fairs held. From the late 19th century many small houses were built, mainly in the south-western part of the village. Council houses were put up at the north-east corner immediately before and after the Second World War, and an estate of privately built houses went up along the southern side of the village in 1961 and 1962.

This is a picture taken from a post card of the war memorial with railings around. (thanks to Jackie Shubert for image)

I have no idea when the picture was taken, so if anyone knows any more about the Railings please let me know!!